How to Identify and Avoid Passive Voice in Your Copy

There are a ton of things you are probably doing wrong that you don’t even realize.

What’s worse, you could be making the same mistakes over and over for years on end.

The number one copywriting mistake that all marketers make –costing them precious Google ranking positions?

It’s the slouching of writing.

If you’re worried about it, you’ve probably been searching Google for stuff like “avoid passive voice” or “passive writing checker.”

You’ve probably discovered that most articles about it are confusing.

This might be your fifth article on the topic and you still might have no idea what passive voice even is.

We’ll not only explain passive voice in simple terms that a Kindergartner would understand, but we’ll also give you a super simple hack to spot it in your writing.

What is Active Voice and Passive Voice?

Let’s start by describing active and passive voice and then comparing them with each other to understand the key differences.

We say a sentence is written in the active voice when the subject performs the verb’s action. The active voice brings a bold, direct and clear tone to sentences. Here are a couple of straightforward examples of active voice.

The passive voice doesn’t lead with the subject of the sentence that then commits an action. Instead, passive constructions focus first on the object, then the action and then the subject. Let’s dive into a couple of examples to get a feel for the practical application of passive voice.

Using the passive voice reversed the sentence structure, necessitating the use of the preposition by. In fact, all of the altered phrases required the addition of by.

Tell Me How to Spot Passive Voice Like I’m 5

If you’re still not quite sure about the difference, then let’s head back to grade school for a minute. I know it’s a pain, but it’s worth it. Trust me!

Passive voice is one of those things that can get super complicated. It’s a stylistic thing, meaning there are tons of exceptions to it. That can get aggravating.

But generally speaking, passive voice happens when you put the subject (the thing doing the thing) after the verb (the thing getting done).

Why Does Passive Voice Matter?

The main reason to drop passive voice constructions is that it’s one of the easiest ways to improve readability.

If you have a good readability score, then your readers stick around your content longer, which Google values, and rewards your page in search engine results pages (SERPs).

In fact, the search giant’s very own Gary Illyes straight up tweeted that if your writing sounds bad when you read it out loud, it will kill your ranking score.

DYK if you read out loud the text on your page and it doesn't sound natural, that piece of text may weigh much less during ranking pic.twitter.com/IfXMKB1GFg

According to Yoast, readability and SEO is all about user experience. If the writing is bad, frustrated users bounce more quickly. Google will see that happening a lot and will punish you.

Depending on the complexity of the topic and your audience, good readability can be a challenge. Google isn’t punishing the Harvard Business Review (HBR) for its 30% readability.

But the HBR, an established authority, is a little different than an SMB’s blog. Fewer competitors, too.

In any case, even if the complexity of HBR’s topics hurt its readability, passive writing will result in an even lower readability score. Since passive voice is almost always unnecessary, we think you’ll agree you need all the tips you can get.

Why Should You Avoid the Passive Voice?

Employing passive sentences makes your writing sound remote and your message less obvious. This is owing to two key factors:

The passive voice is undoubtedly wordy, conveying a message in more words than could be achieved through the use of the active voice.

Passive voice version: “The house is cleaned once a month by Harry.”

Active voice version: “Harry cleans the house once a month.”

The passive voice employs a sentence construction that demands extra mental gymnastics from your reader. This reduces your chances of getting your message across.

There is no benefit to using the passive voice in the above house cleaning example — the active sentence delivers the exact information. Try to consider whether an active option could deliver the same result when using passive voice.

Pro Tip: Start the sentence with a verb phrase to achieve maximum clarity.

Yes, There Are Exceptions

There are cases where passive voice is acceptable. You might not know who the subject is. For example:

Passive voice is also acceptable if the subject isn’t as important as the action performed. For example:

And no, “app” is not the subject here, because it’s not doing anything. Something is being done to it.

How to Stop Using Passive Voice in Your Writing

Do you want to make your writing more dynamic and powerful? You can avoid using the passive voice sentences by following a few easy steps.

As with most things in the writing world — and, indeed, in the world as a whole — a lot of it boils down to practice. As you write, take the time to go over your work, look for instances of passive voice usage, and convert them to active voice wherever makes sense.

Using the active voice will become second nature with time. Of course, everyone requires some assistance along the road.

If you’re still a little unsure, don’t worry. I have a hack that will make this all easy.

If you’re looking to brush up on your Blogging skills, turn to these helpful posts for some tips and tricks to get you started:

If you’re wondering how to use less passive voice in your writing process, then rearrange your sentence so the subject comes before the verb, not after.

If that still sounds complicated, here’s a really easy way to do it on the fly. Swap out the subject (the thing doing the thing) for “I”. Make yourself the subject in the first person.

This is a passive sentence. It reads fine, but let’s say you want it to be active. Eliminate the grammatical subject, or the thing doing the thing, and force replace it with the first person “I”.

Doesn’t make any sense, right? But it would if you put the subject in front of the verb, or the thing being done.

Now that you’ve rearranged your sentence, all you need to do is replace “I” with a subject that fits the original intent of the passive sentence you started with.

What if the subject isn’t present or obvious? As we pointed out with Apple’s app above, the first thing in the sentence isn’t automatically the subject. The subject is specifically the thing doing the thing, and might not always be present.

This is a passive sentence.

“Mistakes” is not the subject, because they’re being made, they’re not making themselves. Someone or something has to make the mistakes.

The subject is the thing that does the thing. So where is it in this sentence?

It’s hiding. You have to add it back in.

Forcing “I” into the sentence as the subject isn’t going to solve every instance of passive voice.

But it should account for 90% of the examples you’re doing by accident. It’s kind of like the “by zombies” passive voice hack — also a good one.

The more complex a sentence is, the harder it’s going to be to identify passive voice, and like we said, there are some cases where passive voice isn’t only acceptable, but preferred. In those cases, you’ll need to choose between active or passive voice.

But most uses of passive voice in copywriting don’t fit those criteria and are the result of bad style.

Your copy will read much more smoothly if you eliminate casual uses of passive voice as much as you can.

Use These Free Tools to Quickly Spot and Fix Passive Voice

If you have trouble spotting passive voice, don’t worry. As I’ve said above, it takes practice. And you don’t need to spend hours rewriting every sentence to make a 100% active piece of copy.

Just be mindful of casual uses of passive voice and eliminate them. You’ll have stronger and more succinct copy that makes your readers, and thus Google, happy.

You can also use the following apps to score your readability:

Here’s a guide to readability scores:

But bad style will still frustrate those users and cause them to bounce for a competitor of yours, and that will hurt your SEO. So you owe it to yourself to drop the passive writing regardless.

This hack is our gift to you, so give it a try and let us know what you think of it. If you’re a writer yourself, eliminating passive voice will help you stand apart from your competition.

If you don’t consider yourself a writer but are responsible for your company’s blog, then this trick will help you look like the real deal. 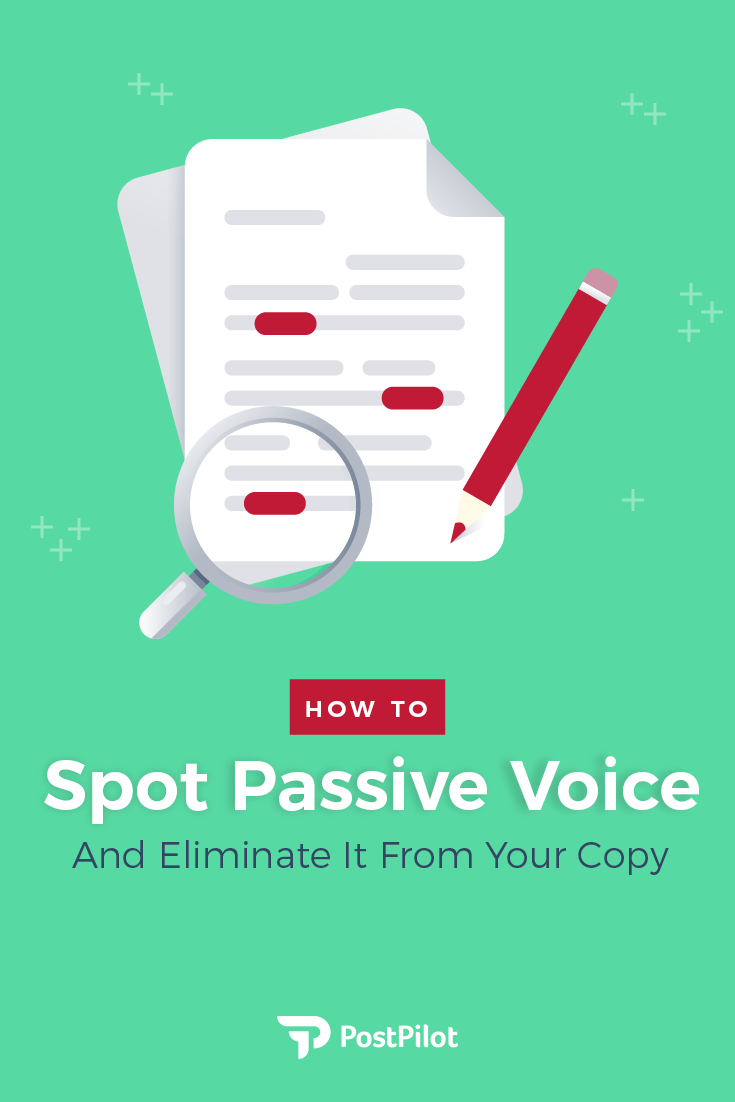 Link Building Techniques: How To Earn Premium Backlinks as a Small Business

How To Write Blog Posts That Sell Without Being Salesy

How to Boost Your E-Commerce Sales With an Engaging Blog